Generational decline in the Book of Mormon and the number 8

Following up on my last post, here is another interesting bit of information indicating a deeper pattern in the cycles of societal decline depicted in the Book of Mormon. Even societies founded upon the principles of revelation (the mantic worldview) decline into the intellectual, materialistic perspective which denies the Christ and even the need for the Christ (the sophic worldview). This is a major theme of the Book of Mormon. Often this theme is emphasized in quite subtle ways.

Consider the following chart from this paper by Val Larsen, depicting the generations of two sets of Nephite record-keepers: 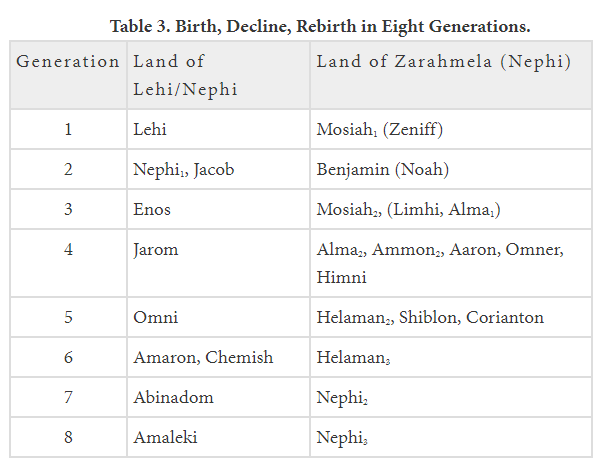 In both cases, we see exactly 8 generations from founder to full decline/renewal (counting siblings as the same generation). Amaleki, the final keeper of the small plates, describes the narrow escape from destruction led by Mosiah-1, then later hands the plates to Benjamin. Nephi-3 witnesses the ripening of the Nephites for destruction and the arrival of Christ, and is selected as an apostle of Christ. In both series, the 8th generation experiences the new beginning, which is precisely what the number 8 signifies on Hebrew understanding: new life.
In both cases, we see evidence of a decline from the mantic worldview to the sophic worldview, then a restoration back to the mantic by means of divine intervention.  Benjamin is the son of Mosiah, who saved a portion of the Nephites from utter destruction.  Christ, of course, brought a new beginning to those who survived the destruction.
In the case of the small plates writers, we get a visual depiction of this return to Christ when we divide the number of references to Christ by the number of words generated by each writer (I generated this table from data provided in Table 2 of the Val Larsen paper linked above): 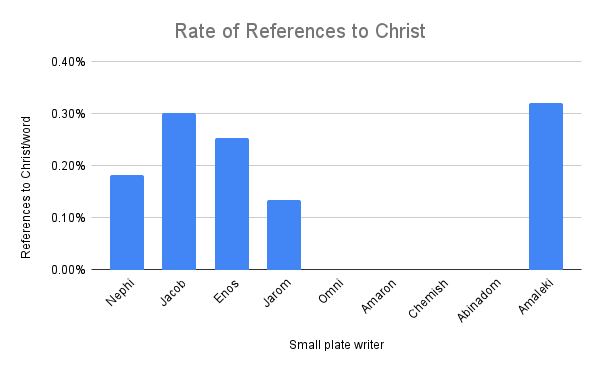 Alma 6 is a short transitional chapter between sermons in Alma 5 and 7, where Mormon moves from quoting Alma's words on the plates of Ne...